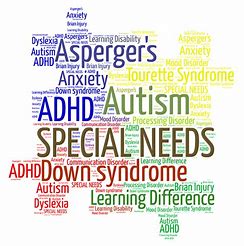 Students can qualify for Special Education under one of the following conditions:

Each of these categories is described below:

Intellectual Disability, (ID) is a formal and diagnosable mental disorder (as defined by the DSM) as well as a category of disability under IDEA. IDEA defines Mental Retardation as a disability in which children have “significant sub-average intellectual functioning,” have below average adaptive functioning, and have developed these deficits early in their development. Intellectual functioning is measured by IQ testing, and a score of 70 or below is considered “significant sub-average.” Adaptive functioning describes a person’s mastery of everyday living skills. Most people develop these skills naturally as they grow, watch others, and interact with others, but youth with intellectual disabilities need specific instruction to learn many of these skills. Intellectual disabilities can range from mild to profound. The more severe the disability, the more educational supports the students will need. .

Traumatic Brain Injury (TBI) is defined by IDEA as an “acquired injury to the brain caused by an external physical force, resulting in total or partial functional disability or psychosocial impairment, or both, that adversely affects a child’s educational performance.” Car accidents, nasty falls, severe sports injuries, or child abuse can all be causes of traumatic brain injuries. To meet IDEA requirements, this brain injury cannot have occurred during birth. These injuries can cause problems with memory, language, attention, reasoning, judgment, abstract thinking, problem-solving, emotional regulation, and social interactions.

Specific Learning Disabilities (SLD) include reading disabilities, or dyslexia, writing disabilities, and math disabilities, all formal, diagnosable mental disorders under DSM. IDEA defines specific learning disability as a “disorder in one or more of the basic psychological processes involved in understanding or in using language, spoken or written, which disorder may manifest itself in an imperfect ability to listen, think, speak, read, write, spell, or to do mathematical calculations.” Most students who receive special education services do so under this qualification. Students are normally evaluated for these disabilities through the demonstration of a discrepancy between scores on intelligence and specific achievement tests.

Emotional Disturbance (ED) category is defined as, “a condition exhibiting one or more of the following characteristics over a long period of time and to a marked degree that adversely affects a child’s educational performance: a) an inability to learn that cannot be explained by intellectual, sensory, or health factors, b) an inability to build or maintain satisfactory interpersonal relationships with peers and teacher, c) inappropriate types of behavior or feelings under normal circumstances, d) a general pervasive mood of unhappiness or depression, e) a tendency to develop physical symptoms or fears associated with personal or school problems.” Often, children who are eligible for special education services under this category have a specific mental health diagnosis like depression, anxiety disorder, or oppositional defiant disorder, but it is not necessary for a child to have a formal mental disorder diagnosis to meet this criteria. If a child’s mood or behavior disturbance is so significant that it prevents him from learning, it may qualify and should be evaluated. This could mean that a child is so anxious that she refuse to come to school and become truant, or this could mean that a child is so depressed that she argues all the time with peers, get in trouble, and neglect her work. .

The Autism (AU) category includes all of the Autism Spectrum Disorders, also known as Pervasive Developmental Disorders. IDEA defines Autism as “a developmental disability affecting verbal and nonverbal communication and social interaction, generally evident before age three that adversely affects a child’s educational performance.” IDEA also recognizes that some students with Autism spectrum disorders may also show repetitive, non-functional behaviors, that can even be violent or self-harmful, and they may also show extreme resistance to change in daily routines or habits. Likewise, they may maintain extreme interest in one or two particular activities or things, like dinosaurs or family genealogy. These youth may also show extreme sensitivity or lack of sensitivity to sensory input like sights, sounds, touches, textures, tastes, and smells.

Speech and Language Impairment (SI) is also known as Communication Disorders. These disorders are defined as, “a communication disorder, such as stuttering, impaired articulation, a language impairment, or a voice impairment that adversely affects a child’s educational performance.” This covers a wide range of problems. Some children may not be able to communicate through spoken language at all, while others struggle to organize all of their thoughts in an organized way to communicate them clearly. Other youths struggle to pronounce certain words or sounds correctly. However, communication disorders do not describe cultural differences in language, such as accents or dialects. Deafness is defined as a “hearing impairment that is so severe that the child is impaired in processing linguistic information through hearing, with or without amplification, and that adversely affects a child’s educational performance.”

Conversely, IDEA defines Hearing Impairment (HI) as “an impairment in hearing whether the child is impaired in processing linguistic information through hearing, whether permanent or fluctuating, that adversely affects a child’s education performance but that is not included under the definition of deafness.” While a child who is hearing impaired may be able to use sound as way to gather information with the help of hearing aids or other devices, deaf children cannot use hearing.

The Visual Impairment – (VI) (including blindness) category is defined as, “an impairment in vision that even with correction, adversely affects a child’s educational performance.” The term includes both partial sight and blindness. While some children will be able to use corrective devices, like glasses, and other assistive technology to improve their visual capabilities, other children cannot use their vision at all.

Another IDEA category combines the two above disabilities. Deaf-blindness‘s educational definition is, “concomitant hearing and visual impairments the combination of which causes such severe communication and other developmental and educational needs that they cannot be accommodated in special education programs solely for children with deafness or children with blindness.” Because both disabilities at once so greatly impact children’s ability to communicate and to learn from the world around them, deaf-blindness creates very profound needs.

Other Health Impairment (OHI) – includes a long list of other medical problems that can interfere with daily functioning. This category includes diseases such as Diabetes, Cystic Fibrosis, HIV and AIDS, Asthma, Epilepsy, Cancer, and Attention Deficit Hyperactivity Disorder. According to IDEA, Other Health Impairment means “having limited strength, vitality, or alertness, including a heightened alertness to environmental stimuli, which results in limited alertness with respect to the educational environment that is due to chronic or acute health problems.” These limitations have to be negatively affecting a child’s education. Often, special education services for these youth require special health care accommodations and other assistive technologies woven into the general education curriculum and schedule. However, because of frequent medical care and absences due to illness, they may fall behind academically more easily.

Multiple Disabilities (MD) – encompasses children who are experiencing more than one of the 12 disabilities described above. IDEA defines Multiple Disabilities as “concomitant impairments (such as mental retardation-blindness, mental retardation-orthopedic impairment), the combination of which causes such severe educational needs that they cannot be accommodated in special education programs solely for one of the impairments.” However, children who are both deaf and blind do not fall under this category, unless they have yet another disability.